I originally wrote this Franke Teardrop back-story at the request of the Museum of Modern Art and have revised it for this aVideoLife blog.   Here is a good summary by Michael Shore in the Rolling Stone book.  (Two small corrections, I probably shot about a third of the footage -described in greater detail below- and I’m almost sure the cadaver is from a morgue.)

This is the history of the video – while working on the Synapse Visiting Artists Program at Syracuse University in 1975 I met artist Jaime Davidovich during his residency there.  I moved back to NYC in 1976 and helped Jaime with his efforts to launch Cable Soho.  He introduced me to artists Edit deAk & Walter Robinson in 1977.  They lived across the street in a great big loft near the corner of Houston and Wooster.

Though I had encountered a cross-section of NY artists at Synapse, most of them primarily worked in video, Edit and Walter were more on the downtown edge of things. They published this incredibly cool art zine called Art-Rite. Guest artists would be invited to do the covers, featured here was the one made by their friend Alan Vega of Suicide. (The other half of Suicide is Marty Rev.)

Edit and Walter worked up a film for the Suicide song Frankie Teardrop that was played/performed “live” with several Super 8 projectors to a record’s playback.  A central aspect was the overlapping pf projections. Then they often re-filming the superimpositions.  That then resulted in a (re-filmed) composite that could be introduced back into the real-time projected mix.  I saw them stage this multi-projector version in their loft.

Jaime was interested in getting FT made into a videotape he could cablecast on his Cable Soho program and so he introduced me to them, knowing I liked this kind of music.  I was excited about the project and wanted to get involved.  Since I worked on staff at a world-class editing facility, I knew I could bring a lot to getting this made into a video.  Besides transferring the Super-8 to video, I felt like we needed more footage to flesh out this 10+ min. song.  I borrowed their Super-8 camera and shot some more in Queens and the Wall Street area.

I also borrowed a video camera and went with Walter to Queens to shoot some additional video in an industrial area where I used to work.

Next I went back to Syracuse to transfer to the film to 2″ tape c/o Synapse Visiting Artists Program.  My boss (in NYC) gave his blessing to do personal projects at the video facility as a way to practice my editing (in this case learning CMX the original computer timecode editing system).  The understanding was that I would do this discreetly at odd hours so as not to provoke interest or controversy.  I did the editing alone, but tried to honor key elements of the FT original film structure. I would meet with Walter and Edit to review the progress by screening 3/4 tapes.

One of the key differences between the ‘live’ film and the resulting video came with refined sync with music so that images and transitions could land on precise music cues. This new (1977) edit room also made it easy to do dissolves and superimpositions that at that time were financially out of reach to video artists ($400ph in 1977 dollars!!)  The other thing that was even more out of teach was slow-motion, easy with Super 8 by adjusting projector speed but in video even more rarefied than dissolves.  In the days of 2″ Quad videotape, there was no tape slo-mo, it required a Ampex disc recorder that was primarily the domain of sports slo-mo replays and extremely rare in edit rooms. Get a load of this Monster below:) To the right of the waveform monitor is a patch-panel for analog computer programming!

There was a hiatus between our finishing FT (early 1978) and it premiering on Cable Soho.  It ran in 1979 and my friend Steve Latham designed the handbill poster and I think help me plaster it around town. 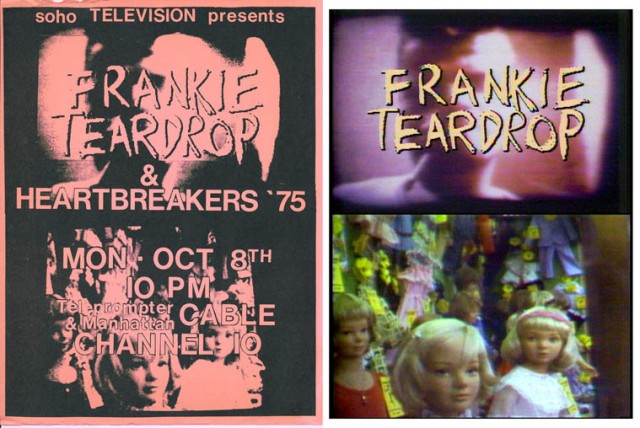 Since Jaime had a 30 min program slot I volunteered a Heartbreakers (with Richard Hell) performance video (1975) as a complimentary segment.  I had directed this video (switching the 3 cameras) as part of the Metropolis Video gang that shot some of the early performances at CBGBs.